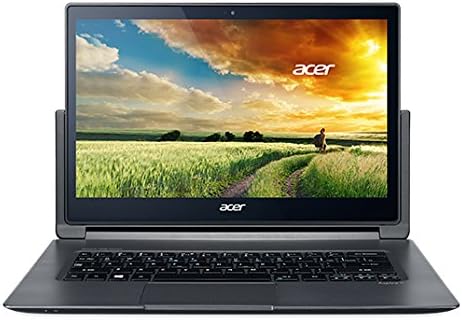 Over the past few years, laptop makers have spent a lot of time trying to crack the formula for 2-in-1 design. Most companies have settled on 360-degree flip displays or detachable screens, but on the Acer Aspire R13, Acer chose to go with a third option.

The Acer Aspire R13 uses a floating frame to hold the screen, which allows the display to open and tilt like a traditional laptop while also letting it spin in place for tablet mode.

This gives the Acer Aspire R13 additional modes not seen on other designs, such as an “Ezel” mode, where the screen floats above the keyboard, and a low-angle stand mode that’s perfect for tight spaces or use in bed. You’ll also find the usual notebook, tablet and tent modes.

This design comes with a few trade-offs, though. The bezels on the R13’s screen are thick and fat, especially along the bottom. At a time when we’re seeing edge-to-edge displays on laptops and smartphones, the layered black borders around the display make the R13 look clunky and dated. Another problem is that, unlike other 2-in-1s, there’s no touch Start button on the front of the screen for tablet mode, making you reliant on the side-swipe gesture to go back to the Modern UI home screen. Lastly, because the plastic floating frame extends only halfway up the side of the display when closed, the R13 is a sea of right angles and raised edges, lending it a somewhat unfinished appearance.

That said, the overall aesthetic isn’t a complete fail. The shiny plastic back looks sleek, and the seamless gunmetal-gray deck features a fluid transition to the inset Chiclet-style keyboard. With the R13, Acer favored function over form. I just wish it could have combined all of the different elements into a more modern and cohesive package.

The keyboard on the Acer Aspire R13 differs a bit from the typical laptop setup. The biggest differences are the size of some keys: The Escape key is half of the normal size, and the Caps Lock key has been reduced by two-thirds to accommodate the tilde key that fills the remaining space.

When using the Acer Aspire R13’s keyboard, I noticed typing felt a little stilted due to the short 1.1 mm key travel (1.5-1.6mm is standard) and the slightly higher-than-normal actuation weight of 64 grams.

The one-piece touchpad features a smooth matte finish, and with 4.1 x 2.3 inches of real estate, there’s a good amount of room to mouse around. The R13 never struggled to differentiate between left and right clicks, and gestures such as two-finger scrolling and pinch to zoom were fast and responsive.

After seeing the emphasis Acer put on the Acer Aspire R13’s design for adjusting the display, I was expecting a little more from its 13.3-inch 2560 x 1440-pixel touch screen. It’s not bad, but it just doesn’t look better than its competitors. When I watched the trailer for Jurassic World, I loved the crisp, colorful images from the high-res display, but the prehistoric amber lacked the deep golden hues I saw on other displays.

At 238 nits, the R13’s display wasn’t able to match the brightness of its foes, either. For comparison, the Yoga 3 Pro scored 318 nits, the Click 2 Pro measured 255 nits and the ultraportable average is 252 nits.

The strongest aspect of the Acer Aspire R13’s display is its wide color gamut, covering 109.6 percent of the sRGB spectrum. That’s higher than both the Yoga 3 Pro (99 percent), the Click 2 Pro (98 percent) and the ultraportable average of 77 percent.

To test the Acer Aspire R13’s touch screen, I played Sonic Dash, one of Sega’s recent attempts to bring its bombastic blue mascot back into the limelight. While Sonic weeps at being forced to headline an unimaginative free-to-play endless runner, the R13 responded swiftly to swipes and taps in all directions as the once-great hedgehog avoided angry crabs and menacing totem poles in a mad dash to collect his precious golden rings.

The R13 features Acer Active Pen technology, which works with the optional $50 Acer Active Stylus for writing and drawing directly on the screen.

Acer’s included Hover Access software gives you the ability to program the Active Stylus’ two buttons to open a limited selection of apps (Fresh Paint, OneNote, Sticky Notes and Windows Journal), or to change the pen into erase mode by holding the top button.

The slim two-tone matte black-and-gun-metal-gray pen matches nicely with the R13, and features 255 degrees of pressure sensitivity. Unfortunately, in my experience, the levels of sensitivity felt much less varied.

The Acer Aspire R13 responded accurately to taps and swipes, but when I tried to draw in Fresh Paint, I struggled to find the middle ground between a faint wispy line and a full-weight stroke. Another quirk was that I could never reliably use the stylus’ buttons to open its assigned app. Instructions to hover the stylus above the screen and hold down the button failed to summon any software, even after multiple visits to the Hover Access settings menu.

Palm rejection worked as expected, preventing inadvertent touches from turning into unneeded writing. Outside of Acer’s approved apps, the stylus was a fine substitute for my fingers, tapping and dragging without a problem. Acer’s Active Pen performs well for taking notes or making simplistic illustrations, but the advanced functions can be hit or miss, and more serious artists will want to look elsewhere.

The Acer Aspire R13’s stereo speakers are positioned on the bottom of the system, behind the front two rubber feet. When I listened to PNAU’s “Solid Ground,” I experienced less-than-stellar audio. The mids and tinny highs battled across an overly airy, echo-filled soundstage, while the weak bass got lost in the fray. There’s also Dolby Digital Plus audio software for selecting preset equalizers for music, movies, gaming and more.

When stressed, the R13 did a decent job of preventing the deck and keyboard from getting too warm, but the bottom was a different story.

On the Laptop Mag Heat Test (15 minutes of streaming HD video from Hulu), the underside of the chassis reached an unpleasant 104 degrees Fahrenheit.That’s above our 95-degree comfort threshold. However, the touchpad and space between the G and H keys stayed below our cutoff, at 77 and 88 degrees, respectively.

The Aspire R13 comes with a 720p webcam, which did an OK job of capturing images and videos. In a selfie I took at home, the webcam captured some of the detail in my hair and the whitish lighting from a nearby monitor, but the Japanese characters on my jacket were smudged and hard to make out due to the graininess and low resolution.

Featuring a 2-GHz Intel Core i7-4510U CPU, 8GB of RAM and two solid-state drives totaling 512GB of storage, the Aspire R13 comes with everything you’d expect from a $1,500 convertible, and a little more. This Acer was more than fast enough to handle my normal workload, which includes upwards of 15 tabs open in Chrome and multiple spreadsheets, while simultaneously streaming two 1080p videos in the background.

The R13’s secret weapon is its two SSDs, which are configured in a RAID 0 arrangement for blazing-fast drive performance. From a cold start, it takes 10 seconds or less to boot Windows, with programs and large files opening with a speed like the terrified masses fleeing Godzilla.

With the help of a powerful CPU and Intel’s integrated 4400 graphics, the R13 does a good job of handling light and medium graphics loads, even at its 2560 x 1440p native resolution.

The R13 played casual games such as Hearthstone: Heroes of Warcraft at its native res and medium settings effortlessly, and the more demanding League of Legends averaged more than 30 fps on medium at 2650 x 1440p.

When we ran the 3DMark Fire Strike graphics test, the R13 scored 571. That’s significantly better than the Core M-powered Yoga 3 Pro (384 with Intel HD 5300 graphics), but slightly behind the Click 2 Pro (598 with Intel HD graphics).

On the Laptop Mag Battery Test (continuous Web surfing over Wi-Fi at 100 nits), the R13 lasted 7 hours and 36 minutes on a charge.

At the time of this writing, there’s no price difference between systems featuring a 4th or 5th generation Intel CPU on Acer’s store. That makes it important to check which processor you are purchasing (look for the first number in the processor (i5-4210U vs. i5-5200U), as 5th generation chips are more energy-efficient and faster, and offer improved integrated graphics.

Our R13 review model came refreshingly devoid of any bloatware or intrusive offers (aside from the typical Office trial from Microsoft). The only shortcut on the desktop was for Acer’s Care Center, which gives you easy access to system info, computer tune-up (for cleaning up unnecessary files) and utilities for keeping drivers and settings up to date.

All Aspire notebooks come with a limited one-year warranty from Acer, which can be extended directly through Acer, or from the retailer (although third-party warranties tend to be more expensive).

While the Yoga 3 Pro pushes the design envelope of 2-in-1s with its strikingly slim frame, Acer’s R13 focuses more on speed. The R13’s combination of an Intel Core i7 CPU, 8GB of RAM and lightning-fast dual SSDs gives it a significant edge in power compared to Lenovo’s flagship 2-in-1. You also get a lighter, more portable design than the Toshiba Click 2 Pro, which offers similar specs but a heavy detachable screen. And let’s not forget that the Acer’s battery outlasts them both. The R13 isn’t the prettiest or the lightest 2-in-1, but if you prefer speed to looks in your convertible, Acer strikes the right balance.